Workshop for children at the Pôle des Etoiles 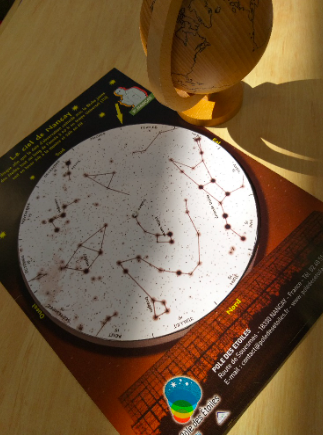 Since the dawn of time, men fascinated by the stars have given names to some 2,000 of them. Connecting some with imaginary lines, they traced figures on the celestial vault thus creating the constellations.

Stars and constellations once allowed them to guide themselves
at sea and on land and predict the seasons. To standardize their knowledge of the starry sky, astronomers drew a map showing the names of each star and constellation visible in the Northern Hemisphere. Each child makes his card following the instructions of the mediator, and learns his
operation and the interest of still observing today. By studying the terrestrial globe and listening to the mediator, they see that the pole star is located in the axis of rotation of the Earth, that this star is fixed, that it indicates the North and that the other stars are rotating. around her.

Workshop for children at the Pôle des Etoiles